Ask Us about
solar Shingles Today! 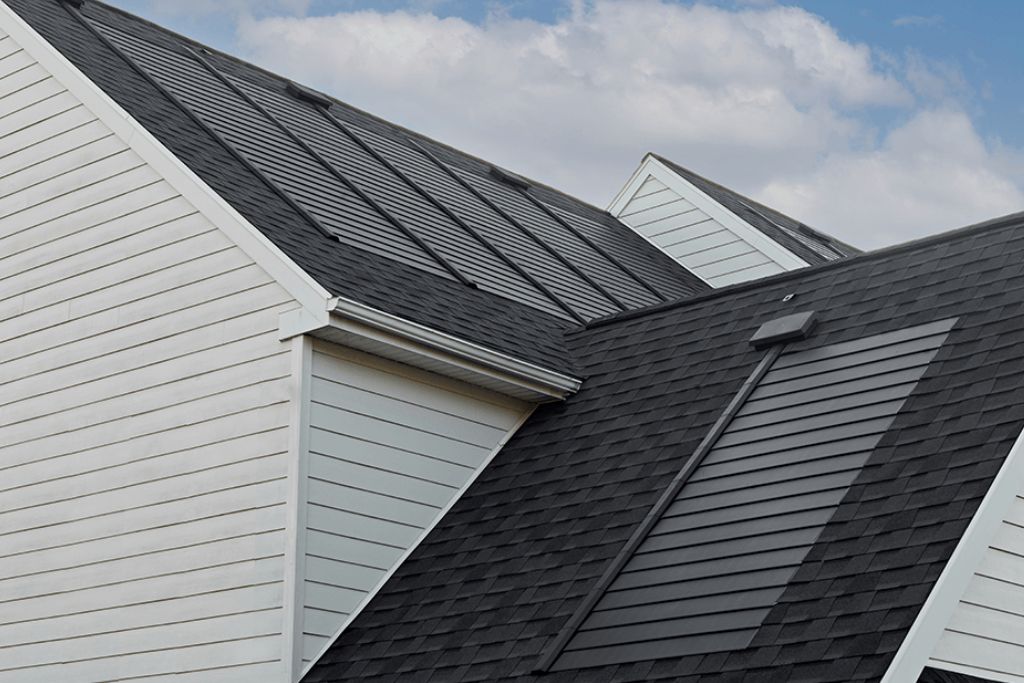 Are you intrigued by the idea of using solar to reduce your dependency on electricity but turned off by the unattractive and bulky panels that are prominently fixed to the top of your roof? We hear you. But let’s take a look at how we got here.

Though the history of solar energy has been around for quite a while—the 1800s, if you can believe that—it was in 1954 here in the U.S. when Daryl Chapin, Calvin Fuller, and Gerald Pearson finally developed the silicon photovoltaic (PV) cell at Bell Labs that was capable of converting the sun’s energy to power everyday electrical equipment. Fast forward to the 1970s, when people first began to see solar energy as a possibility for their homes—for lots of great reasons.

Even more, adding solar shingles to your roof replacement means your roof now PAYS FOR ITSELF instead of being another sunk cost.

Of course, with the good, there’s some bad. Earlier solar technology had a high initial cost, took up a lot of space, had intermittent energy sources, and… was just plain ugly. Sometimes even turning into a hiding place for rodents and wildlife. And even though solar technology has come a long way, the panels haven’t gotten much prettier. Until now.

Modern residential solar options now include solar shingles, which are much more aesthetically appealing than the traditional panels of yesteryear—including GAF’s new Timberline Solar™ shingles. And The Shingle Master is proud to offer them to Triangle area homeowners.

Timberline Solar™ shingles are top-of-the-line, sleek black solar panels that can help you save money on your electric bills without compromising on waterproofing or looks. The Shingle Master, a GAF Master Elite Contractor, can make you the envy of your neighborhood by installing the world’s first nailable solar shingle.

When you work with a GAF Master Elite Contractor like The Shingle Master to install your Timberline Solar™ roof, you get one roofing sale, one roofing crew, and one unified roofing product with one warranty from a trustworthy, reputable, insured, and licensed roofing expert.

Say goodbye to bulky solar panels. Learn more about the benefits of solar shingles by calling us at (919) 372-0685 or visiting us online.

About The Shingle Master

The Shingle Master provides the best quality roofing repair, replacements, and storm restoration services in the Triangle Area surrounding areas for both commercial and residential properties.

Thanks to all our amazing customers! We are proud to serve our community.

Roofs are expensive. We make it easy to pay for them.

Our financing partner can help get your numbers to line up just right for your needs.

Get Qualified in 60 Seconds